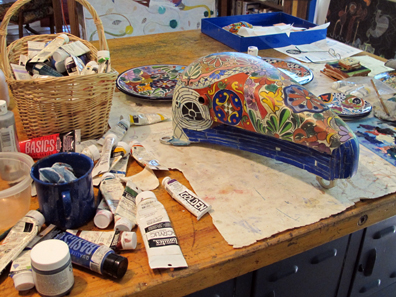 Would you be interested in customizing a motorcycle part for our North Gallery show this Fall? Tiffany, at Mesa Center for the Arts, asks. Why not, you got me to paint a hub cap a few years back, I respond easily this time around.  A few years back she’d asked me to participate in a fund-raiser where artists painted hub caps. I wasn’t so comfortable with the idea. I agreed because it was a good cause. I approach this different. I know now everything is a much bigger experience than you can know at the start.

I stop by MAC the following week and among all the odd motorcycle parts / shapes, I find something that is small, fits into my arms, and is relatable in some way. It looked like ceramic bisque-ware¹.  It even felt like bisque. I thought it shaped like a liver and considered painting a related design. But I opted not to do that. Instead I paint the small gas tank with Talavera² design.  Something about making a steel object normally seen on a motorcycle appear like breakable clay, appeals to me. The shape also lends itself to a tribal mask form, the fill opening can become an eye, I think at the time. 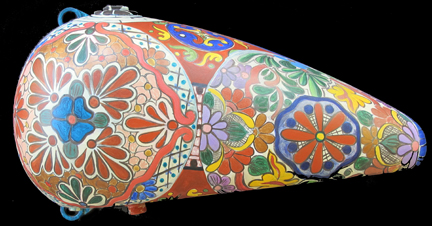 After I’m done with it I put it on the floor to walk around it. I watch my cat as she circles the object first.  She’s unsure of it, almost frightened. I like that. I wonder if she can be part of the exhibit. Ha!

I don’t know how I’ll display it.  I was going to hang it on the wall like a tribal mask. But now…I realize I can sit it on a stand, or wire it from the ceiling. I guess I have a few more weeks to think about this.

Talavera is not usually gloss, but I think this object will be.  It’s still a motorcycle part. Shouldn’t it be shiny?  Yeah, maybe.

1. Bisque ware  When a pot has completely dried, and before it is glazed and glaze fired, a first firing, called bisque firing, is often done. The resulting pottery is called bisque ware. Bisque firing serves the purpose of giving the pot considerably more strength than is has when it is simply dried clay (greenware) thereby allowing the potter to handle the pot more readily without fear of breaking it.

2. Talavera pottery of Puebla, Mexico is a type of majolica pottery, which is distinguished by a milky-white glaze. Authentic Talavera pottery only comes from the city of Puebla and the nearby communities of Atlixco, Cholula, and Tecali, because of the quality of the natural clay found there and the tradition of production which goes back to the 16th century.