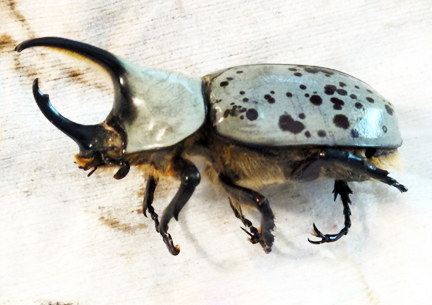 A job took my husband out to a mine in Superior, AZ a few years ago. Deep in the earth he found this Hercules Beetle. He thought I would appreciate the intimidating creature.

It’s the subject of this small collage below. Though I want to approach the work like other anatomy studies, I can’t. Insects are invertebrates – they don’t have skeletal and muscular systems like vertebrates do. 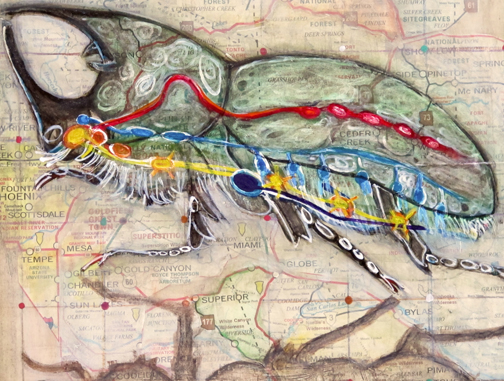 Insects don’t have solid muscles that contract and pull on tendons that pull on bones to make them move. Their muscles are fluid encased in their exoskeleton. They move via a hydraulic system – fluid moves from chamber to chamber causing limbs to straighten out at high pressure and fold at low pressure. If you’ve ever stepped on a bug and seen the white stuff that comes out, that’s the fluid that supports their movement … their muscles. I may never step on a bug again now that I understand this so clearly.

Aside from shape and size – the color of this bug is also a notable quality. Consider it a form of camouflage.  The beetle appears yellow-green or black depending on moisture in the atmosphere. During dry conditions it can be a yellow color. During humid conditions it can appear black. This one, living and dying in the dry heat of Arizona, leans towards green.

I’ve made the small animal studies for 2 upcoming invitational group exhibits. This week someone else invited me to participate in a pseudo-science show. Pseudo-Science – I’ll look up the phrase and consider it may be another interesting opportunity to show these small works. 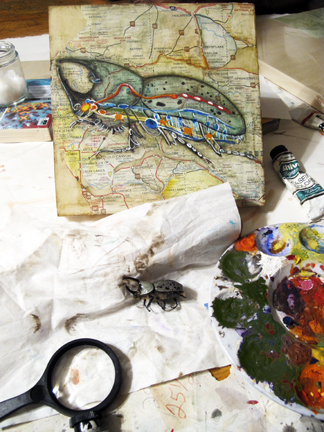 I plan to get back to my large figure work now. I’ve been away from it for too long. The understanding I now have from these small animal studies is invaluable.

1 thought on “studying a hercules beetle”