This last week artist friend Tim, who has an undergrad degree in Neurobiology, sends me an image of a figure. Cortical homunculus, thought you mike like it, he writes.  He explains…a map of the nerve receptors in the brain as related to scale on the body. I know the 2D version of this 3D form and immediately  make the connection.

Cortical homunculus! Why didn’t I ever look closer and why didn’t I note the cool name (words always pull me)?  Homunculus is Latin for little man, add cortical and you have a cortex man (a man in the brain!). The depiction basically represent a map of the body, more specific, nerve fibers from the spinal cord, that end at various points in the parietal lobe formulating a map of the body. I see mostly male (it is a little man, after all) though I do find female representations.

Initiated by Dr. Wilder Penfield who envisioned an imaginary world in which a homunculi (a very small humanoid form) lived. He and his colleagues set up experiments to produce a topographical brain map and a corresponding homunculi.

I enjoy working out the composition and now that I understand, I plan to draw more of them. No doubt, my versions will include the female in the brain!

I label as best I can considering the space I set up before I know all that I will include. One side of the homunculus maps the sensory nerves, while the other side maps motor nerves. ↓ 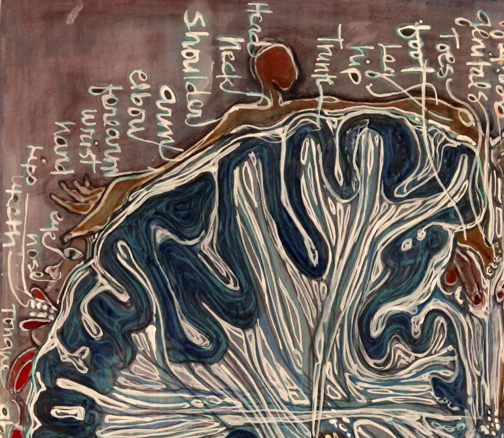 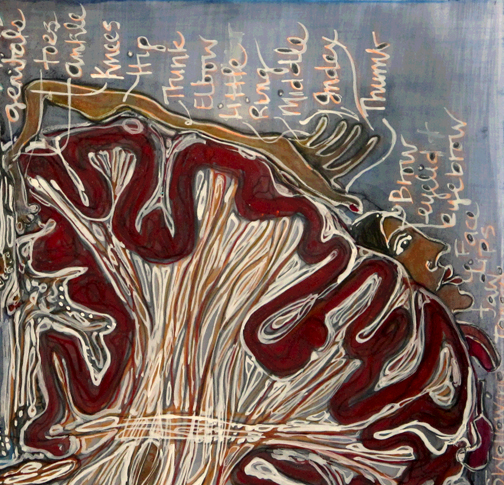 Scheduled to facilitate an adult workshop in mid July, for my artist-in-residency, I now consider the color, line and text of the Cortical homunculus.