A City, Modified, is a cross between historical exhibition and invitational. The show surveys Modified Arts’ origin in 1999 to the present day and explores the galleries’ history as a music venue and arts space in downtown Phoenix through photographs and historical memorabilia. It is also an invitation to a selection of artists that have had an impact on the space and the arts community in Phoenix over the last two decades.

Here are 2 of my memories (in photo)… 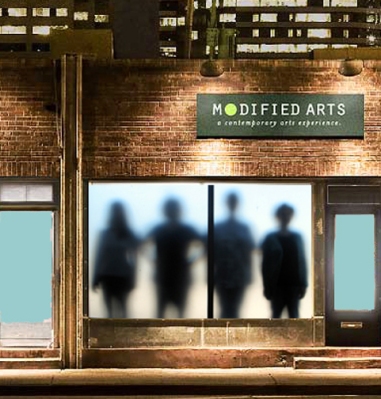 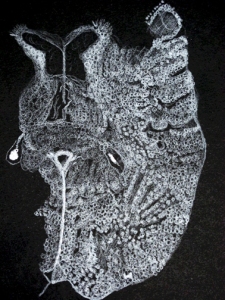 I teach an anatomy drawing workshop at the college of Medicine on the Phoenix Biomedical Campus. Participants come from several programs (including a couple of faculty) though the majority are Northern Arizona University (NAU) students in Occupational Therapy (OT).

They introduce themselves and I enjoy hearing why they signed up to come to the drawing workshop.

One young woman tells us she saw a kidney and thought it beautiful and wants to learn to draw it. I understand completely. Another speaks about the piriformis muscle – she explains, it’s from the Latin and means pear (shaped). She wants to see and know this. I don’t know piriformis means pear-shaped, I want to see this too! Someone else explains she would like to learn to draw the human body when needing to explain something – instead of the usual stick figure. I smile and note if I had a patient and needed to be efficient – that stick figure would come in handy.

I move around the room and learn every participant has a personal reason for being here, including an appreciation of anatomy. Someone tells me she likes my artwork and thinks this could be fun. Thank you. Yes, it will be! I tell her.

They arrive ready with organ (subject-matter) references. And medical models are available. We talk about a contour study and I quickly explain the value of working organically. While Cindi (Director of Art in Medicine) provides a variety of papers (surfaces) and materials – the majority of the group chooses to work on black paper (I’m excited to see the black paper – I know what color does on it). A couple of the participants pick out beautiful rice papers and after some conversation – they work in parts and layers – bringing a more sculptural sensibility to their work.

Here are some captured moments of the afternoon. Note everyone begins with a careful contour study and then loosens up (with some prodding) to bring in color and texture. The nervousness steps aside and the afternoon brings a little science and a little art together. Ahhh…creativity! 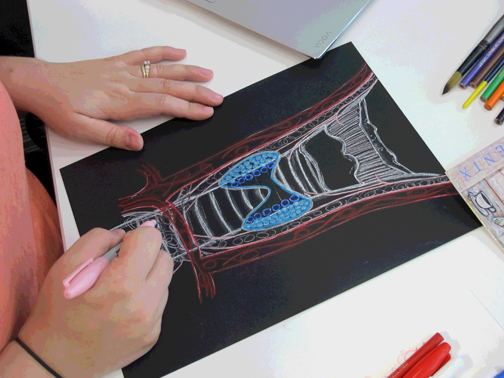 On a side note: I particularly enjoy the overall conversation. It’s an unusual experience being around medical (health and wellness) people. They’re familiar and comfortable with the body in a way that the average person is not.

The afternoon is coming to an end and  I hear comments like … Oh! I love your kidney! Oh…look at your brain!!

I learn some new things. I don’t take notes but I probably could (should) have.
Thanks everyone. And a special thanks to Cindi and Rebecca.

My drawings and paintings are on display right now at UA College of Medicine in downtown Phoenix until March of 2018. You can see the exhibit M-F, 9 to 5.
An Artist Reception is in the planning for February 2, 2018 – First Friday, 6-8 pm.

Invited to show my work with Phoenix Institute of Contemporary Art, it’s the alternative art space that pulls at my attention. I want the challenge.  I spend yesterday installing drawings in the repurposed shipping container.  The long, narrow area has forced me to think and work differently. I realize quickly my original plan is not going to work.

A few curious passerby’s wander in. One woman, from Canada, tells me she’s read about Roosevelt Row and when planning her visit to Phoenix, puts it on her list of places to see.  I ask if they can walk though the space so I can see how they move in it. They are more than excited to comply. They do what I am hoping they will do, plan B works. Are you in Science, she asks. That’s the perfect question. I also meet a group of college students from Boston. They come close to ask questions and take photos.

I title the show Cella and after being in there all day, the name is right. It most definitely is like a small chamber, it is  in fact a rectangular room, simple and windowless, with an open entrance set to the front. Lets see how it will do with a crowd of visitors…I can only guess.

I walk away thinking the room appears like a sterile environment, suitable for anatomy study.

PHOENIX — Two men stepped out of a rental car here recently and walked up to a modest ranch-style house with a cat and a grapefruit tree in the yard, worried that the homeowner might mistake them for missionaries or salesmen.

They were neither. They were representatives of one of the world’s wealthiest art patrons, Alice Walton, the Walmart heiress and founder of the Crystal Bridges Museum of American Art in Bentonville, Ark. And they had come all the way from there to the door of Monica Aissa Martinez …

This summer I received an invitation from Beatrice Moore:

I am organizing an exhibit of all woman artists for September at Frontal Lobe Community Space and Gallery, in the Bragg’s Pie Factory building and I wanted to invite you to participate.

“Sex: A Woman’s Perspective” is intended to be interpreted in any way the artist likes. I’ve intentionally left off any descriptors so as not to influence the interpretation someone decides to make. This exhibit is one of several that will emphasize the work of Valley women artists.

I didn’t wait too long to reply, especially after going through the list of invited artists – most of whom have been actively working in various mediums in the Phoenix and Valley art scene for many years.

Beatrice notes: the exhibit is comprised of women artists who I feel can interestingly, and provocatively, engage the public in a spoken, visual, and tactile dialogue about the many meanings and various interpretations of ‘sex’.

Below are a few examples of works – you only see a part of the art or ‘in progress’ shot. You’ll want to  go see the show in person – for the complete experience.
(Some photos offer artist website link.)

Sue Chenoweth
The Ghosts of Christmas Past – detail
acrylic, wood and mylar on panel
24 x 18″
2013 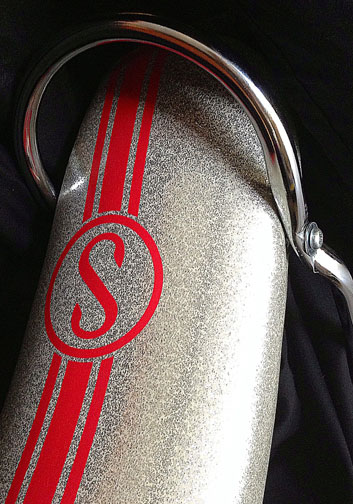 about the space:
The Frontal Lobe Community Space and Gallery is a relatively new space on Grand Avenue in the historic Bragg’s Pie Factory building. The goal of the space is to showcase both established and lesser known artists, and create a place where fine art and community endeavors co-exist, and at times, overlap. The space is intended to be utilized as a community space as much as a gallery, and provides a venue where non-commercial work is encouraged and embraced. Film, performance, music, exhibits, historical explorations, science, and a host of other topics and various mediums are encouraged as part of an eclectic mix and a variety of approaches.

Homage to The Cat – Issa cup of Tea was originally painted for this years Mesa Arts Center fund-raiser. I barely lived with her, as I had to make and deliver within a very short time. I didn’t even sign the small work until I was at the center and saw I’d forgotten.
She’s in California now. I have a standing invitation to visit anytime. 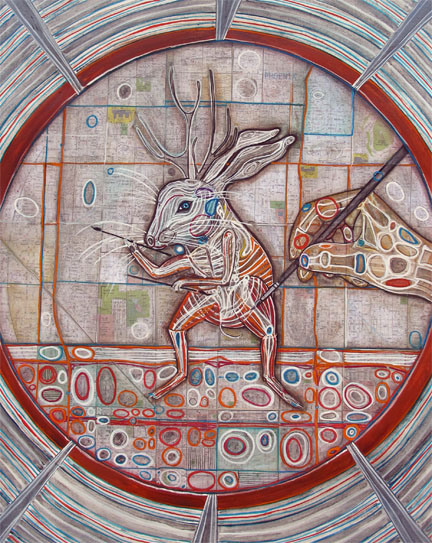 Jackalope – In the View Finder is a work on paper for who else but Jackalope Ranch our own Phoenix Culture blog. It commemorates their birthday. They made a sticker that showed up … well … across Phoenix, and … America. I liked receiving photos of where the sticker – stuck. 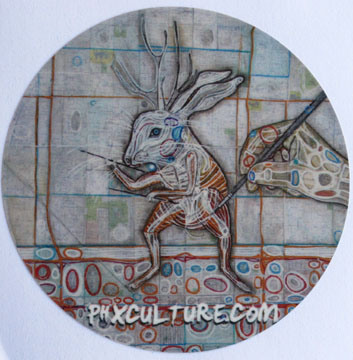 Last month MADE art boutique invited me to take part in an Artist-Made Coasters show. I turned these 2 designs into a set of 6 coasters. Why not.

I received direct orders via Facebook, from out-of-town friends. Very cool. And I’ve replenished the art boutique, they sold the initial sets. It will be a limited series, I’ve placed 3 orders, I may do two more. It has been fun moving the designs further. And connecting. How supported am I. It’s a statement not a question. 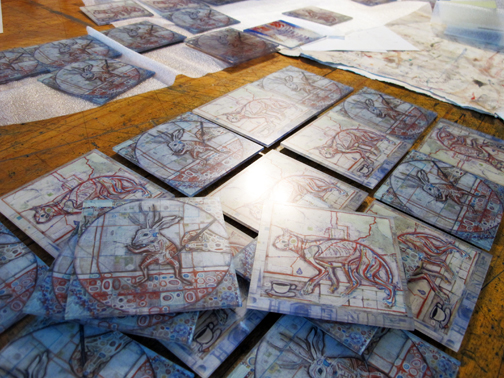 Today I am informed, postcards are in. The cat design, with the help of Facebook again – is now a postcard. Far may she travel.

I’ve had lots on my plate this year, but these little side projects have been nice breaks. And one thing has led to another. I’ve learned new things about material, finishes, quality, costs and pricing. I’m continuing with the serious art making, that won’t stop – but I think now and again I’ll work these little practical art works in to my schedule. I have 3 more cats that I used to know in mind for 3 future paintings, maybe a snail,  and possibly a bird.

The postcard came about through a Phoenix Postcard Competition (yes…MADE sponsored). I was given 200. The rest are at MADE art boutique waiting to be purchased and mailed out. All proceeds go to them. And you’ll also continue to find my coasters there.
Thanks Christy. Thanks Cindy.

It’s hot in Phoenix. And if that heat’s not enough – I headed to Hot Yoga – early this morning.

I spent the rest of the day very focused, in the studio. I have started a male torso. I reworked areas I thought I’d completed yesterday. I wonder if you can see the changes?

I know I’ve mentioned a 3 person winter exhibit at Mesa Contemporary Arts. Carolyn, Mary and me have launched a blog for the show.  We got the title organized and things are moving smoothly as planned.

Mary was in my studio yesterday.  She’s planning to write about my work.  I’ll be in Carolyn’s studio next week. You can read about our working together at → Formal and Informal.

I already posted a few detail shots from this new work. Go … visit if you’re inclined.

©MONICA AISSA MARTINEZ, ARTIST LIVING AND WORKING IN PHOENIX, 2020
No part of this site, image or text, may be copied or reproduced without consent of the artist

Hey! Thanks for stopping by! 🦉