Maria sends an email… I will be back in town next week and was wondering if you have any of your work on exhibit right now. We have friends coming into town for a few days and I’m thinking of things for us to do. So if you were showing somewhere I would love to take our friends. One of them is an artist herself.

I invite Maria, Susan and Laura to come to my studio.

As you might expect  anatomy study surrounds us. We talk the body for a good while. Laura personally relates to the newest kidney drawing sitting on my table. Susan wants to know about materials – the paint and paper.  I understand she has worked in woodcut and now does linocut.

Do you have any prints, she wonders. This question always confuses me. Do people mean a reproduction like a giclée or poster? Or do they mean an original print? I’m a printmaker. I stumble with the words … I have real prints, I say.

Maria wants to know about one particular small print. I’ve only thought about anatomy lately so I have to stop, change focus and think … considering the content of the work, I find it amusing. I can tell Susan and Laura do too.

Here it is, in a nutshell:
The title – Self-Sustaining Confusion – I find in physicist David Bohm’s book On Creativity. I write the phrase on a piece of paper and leave it on my work table. Weeks pass and one day the rest of the composition formulates while I listen to NPR.  A scientist talks about the brain chemistry at various stages of awareness (or lack of) and I hear things like 69 unfolded proteins and limited real-estate in the brain. And that’s that, I pull out a piece of copper and start drawing.

We talk printmaking and intaglio. This is a dry point.  I use a sharp-pointed tool to  scratch the image directly on a copper-plate (I love copper!). Can you see it? ↓ The process of both printmaking and collage tend to free me up, work flows more stream of consciousness.

About this print in particular – If I recall correctly I pull 15 prints, only 7 of them are worth saving. In general the drypoint technique won’t allow for too many pulls, the marks are too irregular. 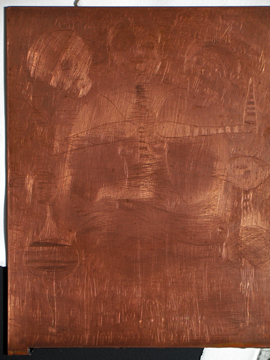 copper plate with drawing on it 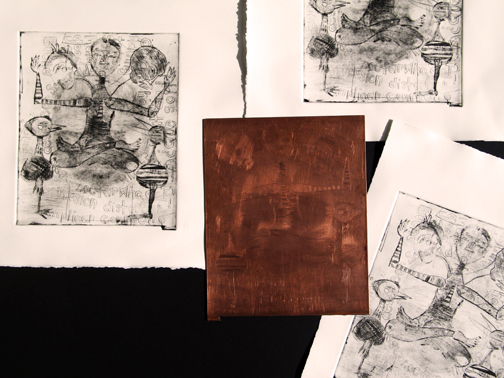 a few pulls of the print

Each image varies slightly. This one is the first image I collage and paint in the series of 7.

We talk about California (where they are from), the ocean, and the desert. We discuss raising chickens (I learn some things) and having fresh eggs (Susan does).  Of course I bring up making  egg tempera paint. They leave my home with plans to visit Frank Lloyd Wright’s (Taliesin West).

Ladies, I appreciate our morning together. Thank you Susan for wanting to take home Self-Sustaining Confusion. It’s the last one of that series. Enjoy it!

The blog posts titled No Woman is an Island acknowledge the people and/or organizations who support me and the work I do.

I have a windy liver, Maria said. A what?  A windy liver, she repeated. I practice yoga with Maria and a group of about a dozen yogi’s. Every Tuesday we meet for three re-energizing hours to hand-stand, back-bend and twist the afternoon away. Apparently Maria had things going on and decided to see an Ayurvedic and Chinese medicine practitioner. The outcome was this diagnosis of a Windy Liver.

Ironically the day before I had painted livers

( not windy ones) as part of a new series titled Vital Commotion, concerning the body-mind connection. Her words resonated visually. Serendipity!

I had to take a pause, because although it got my imagination going, it was for Maria, a personal diagnosis. I prodded, curiously but respectfully. Maria didn’t seem to mind. She did not really know much about the condition.  As usually happens in the Practice everyone chimed in with what one knew about the ailment, or what one thought it could mean. Meg, our instructor, is an Ayurvedic consultant.  She explained some, but it was all still abstract to me.

I wondered if I would be annoyed to be diagnosed with a windy liver or would I be relieved. Maria told us about her treatment, it included sesame oil, I think. I came home and immediately began researching windy livers.

I had purchased some small copper sheets the week before, thinking I might work on a print soon. Little did I know an idea would present itself. Printmaking not only allows immediacy and spontaneity, it also allows wit and lightheartedness in some odd way.  I think this is because initially the earliest forms of printmaking began with the press and from it sprang political satire, its history allows for an easy balance of intelligence and simplicity.

After a few days of research, I formulated a design and scratched it onto the plate.  I worked in my studio, non-stop, and the image just rolled right out. One of the necessities for making a print is to be able to work in reverse. I realized only after I had done it, that the various organs, including a liver, a liver lobule, a gallbladder and spleen were not in reverse.  I knew when I ran the print it would print backwards. But this worked, after all –   imbalance of some sort – is what a windy liver is all about.

I recall I was listening to Mana, a Mexican musical group, for the first time. I was trying to understand the words as I worked on the plate, they were in Spanish. The music seemed fluid and ephemeral, the words poetic.  I had my dictionary with me, and as  I made sense of phrases, I put some of them into the border of the image. The words have to do with earth, rain, fire and air – tierra, agua, fuego, y aire – the elements. This too connected (according to my research). I drew the words in reverse so they would print readable.  This has always been easy for me, to write backwards.  It comes in handy in printmaking.

I pulled a dozen simple prints and brought them back into my studio.  And I began hand- painting one and then two. The first one is titled, Her Diagnosis-A Windy Liver. 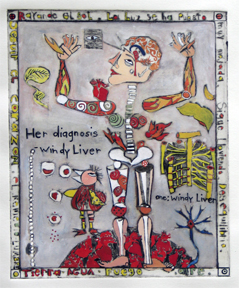 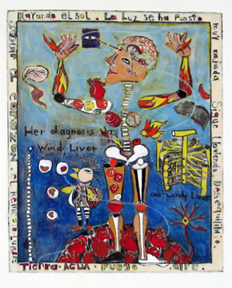 A figure stands as the focal point, on a world of hearts. Areas of the body are in flames. The body is disconnected and disjointed because it is being reset.
Symbols of mind, body and spirit take up space somewhere in the composition, as do literal cells, nerves, and organs.  The figure holds up its hands, open and ready, no fight or flight present.

Not long after I completed these works my friend Andrea, from The Store over at the Mesa Art’s Center, called.  MAC had purchased my lithograph for their permanent collection and she had just seen it. I didn’t know you made prints! Now and again I do, I said. Do you have any small prints I can carry for the upcoming opening? I delivered 7 prints to Andrea within a week, just in time for the opening Print exhibit, in the main gallery.
You can see and or purchase this print along with others in The Store, at MAC.

©MONICA AISSA MARTINEZ, ARTIST LIVING AND WORKING IN PHOENIX, 2021
No part of this site, image or text may be copied or reproduced without permission of the artist.